A couple days before Yarn School, a rooster showed up out of nowhere.

Long story short, for the last 3 weeks, Ruby has been sitting on half a dozen eggs and I’ve been getting more and more excited with every passing day. A few days before the big day, I candled them all and all 6 were a go. Yesterday, one hatched and I was giddy.

Based on the dates, two more were meant to hatch today, so I spent today alternately hanging out in the coop and forcibly removing myself from the coop so Ruby could have some space. As the day chugged along, I watched with delight as more chicks appeared. At one point, I hoisted up Ruby and spotted a third, still-wet hatchling out of a white egg (another of PeeWee’s), as well as a pip in one of Ruby’s own brown eggs–after which, I’d made myself quit poking around under Ruby for fear I’d get her upset and make her squash an egg.  By the end of the day, I’d spotted all 3 little gray chicks from PeeWee’s white eggs scampering around the nest, including the aforementioned hatchling, now almost dry, and alert and eager-looking. I was over the moon. When it got dark, I let the other chickens back in to roost and locked everyone in for the night.

A few hours later, I returned to the coop to turn on the sleep sound machine (which helps keep the rooster from echoing distant crows he hears in the middle of the night or wee hours of the morning), and found Ruby huddled with a chick near the door. Assuming she’d hopped out of the nest after it and stayed with it, I went to the nest box, planning to relocate them all to a crate on the floor. I found a dead not-quite-ready-to-hatch chick and its smashed shell, and one  intact egg, but no chicks. I looked under Ruby and it was just the one, with no dead chicks, no evidence of a dust-up or any chick remains anywhere in the coop. When I realized all but one of the chicks was gone, and I had no idea what had done it, I freaked out and decided to bring her and the chick and the last egg inside and put them in a kennel and try to figure out what happened in the morning.

She was fine when I first brought her into the bathroom (it’s got a heavy self-closing door the cats can’t open). But, probably because , something had just eaten 3 of her chicks and now I was bothering her, too, she started going bananas rushing all over the place, and trampled the last egg–which I would have waited to put back with her if 1) I wasn’t a fucking dipshit; and 2) I had remembered that I’d actually bought a little incubator in case of emergency (though the “emergency” I’d imagined was her getting bored of setting before she finished those 2 late eggs, not all the chicks disappearing in the middle of the night and one of the eggs getting trampled). I was worried she’d trample the chick, too, so I scooped up the egg, turned off the light, and left her alone to settle.

Later I moved her into the kennel (I’d left her just in the nest box with the chick so as not to further agitate her) and split without checking to make sure the chick was okay, not wanting to cause her any further stress.

Then I spent an hour (and by an hour, I mean 2 hours, because Internet Time) online trying to find if there were any local places I could get day old chicks, mainly because it was breaking my heart and I was projecting on to her.

And then I just started crying and it’s an hour later now and I can’t seem to stop. And I know it’s not the chicks; it’s everything. It’s my fears of failure, generally, and anxiety about motherhood and my career and loneliness and my inability to finish anything anymore. It’s my muddied identity and the crushing blow to my peace of mind and, oddly, to my self-confidence, that came from my dad’s long illness and death.  It’s my worry about my mom and about being an inadequate daughter or mother or partner or friend.  It’s the weight of the animals that are gone and the ones that are here, it’s the needing that new life to balance out the old life, like poor arthritic Honeybunch. It’s just another brick on the giant pile of why-can’t-I-get-it-the-fuck-together.

Sometimes, you really need the pure fluffy joy that is a bunch of bright-eyed baby chicks.

And then a snake or whatever eats them all and it’s over just like that.

It just feels like this grim metaphor for life in general and it’s so. fucking. sad.

So, fingers crossed that last chick is still alive.

Here are some pictures from earlier today, when the world still seemed full of possibility. 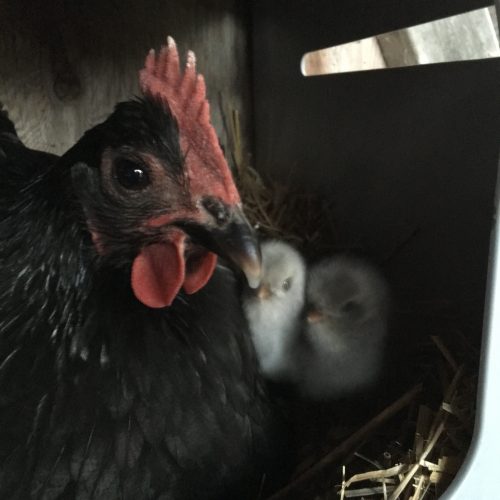 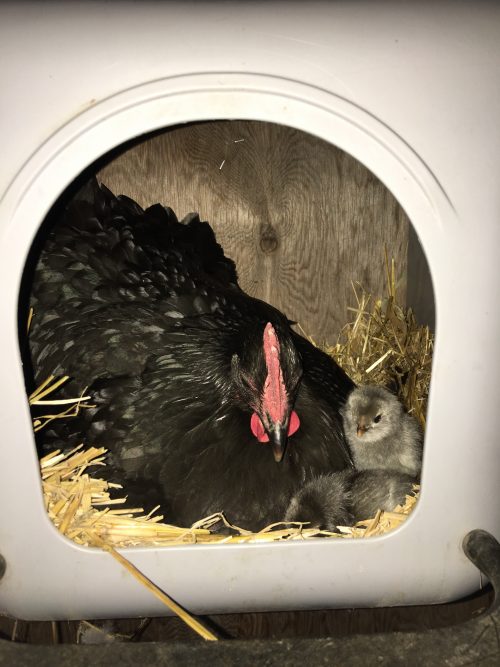 Ruby with 2/3 gray chicks from PeeWee’s eggs. I’m sad I didn’t get to see what her chicks looked like. The dead one was too wet and underdeveloped. 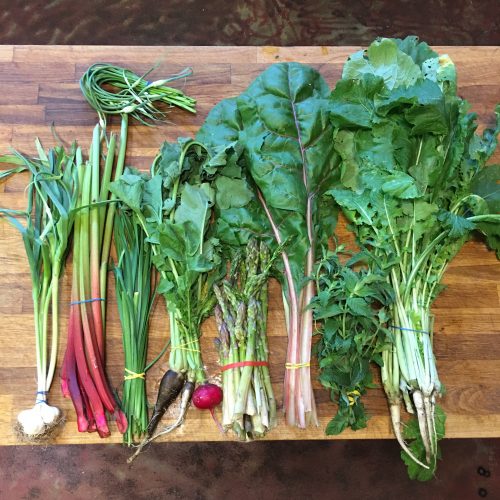 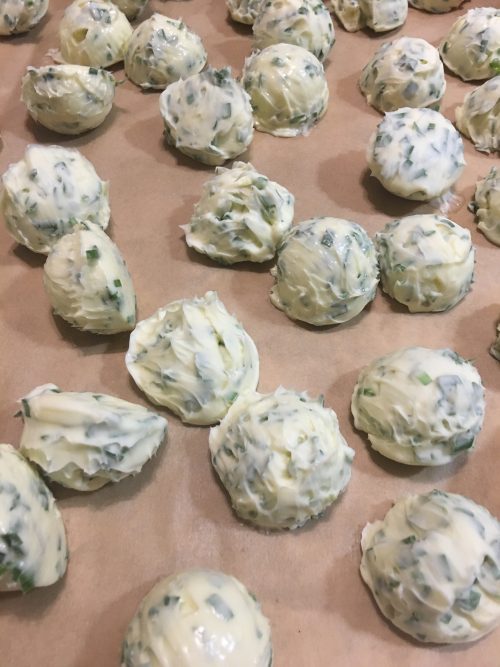 The chives got mixed with good salted butter and frozen in little 2 Tbsp balls for future deliciousness in everything from baked potatoes to blue cheese gnocchi sauce to chops. 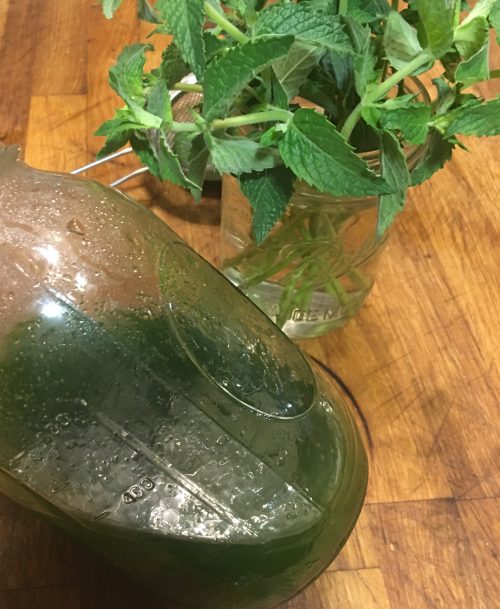 Mint simple syrup from the stripped bottom leaves of the stems I intend to root.  Super concentrated because I realized too late I was almost out of sugar. 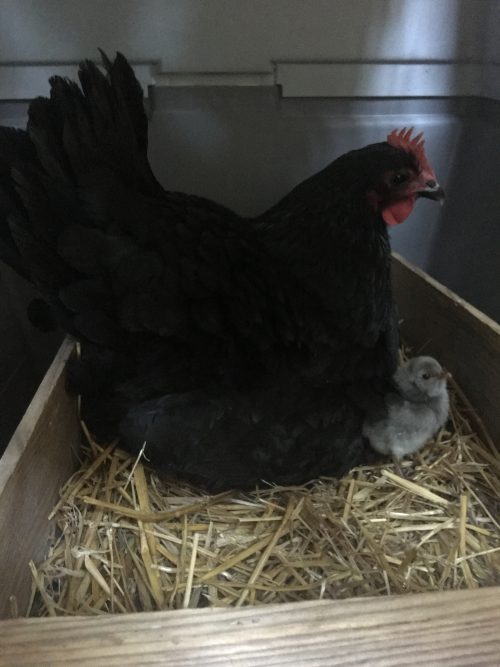 ETA: The surviving chick is alive and mama is tired and wary. My days of peeking under her unmolested are over. I’m strongly considering driving to Beautiful Day Farms (about 2 hours away in Mo) for a few extra chicks for her. In deciding, I get to anthropomorphize on both sides of the question: “But she worked so hard!” “But does she really want so many to look out for?”  And the followup questions for me: Do I really want more chickens (yes) and What am I going to do about the inevitable roosters? I could get just the sex-linked chicks. Then again, those Svarta Honas, tho…