I’m in my usual end-of-year Überlist scramble. This time next week, I’ll just admit defeat and give up until January 2 rolls around, but for now, I’m in a tizzy!

A full year after we finished it, I finally updated colorsourcebook.com and added giant Acid Dye Color Source Book! 395 hand dyed samples in each book. It’s a beauty! Dyed, designed & built by Cathy McQuitty-Dreiling, and charmingly illustrated by the deeply talented Ms. McQuitty-Dreiling. I’ve been dyeing lots of fiber and yarn, but I didn’t get started until after the big cold snap, which wasn’t quite as cold as predicted. Since then, it’s been just warm enough to miss the boiler (just below freezing outside, 65ish inside), so my fiber’s slow drying. In addition to combed top, I’ve been dying lots of lofty roving, angora fleece, and matching batches of superwash wool and nylon sparkle to card together for awesome sock batts!

Speaking of fiber, Art Club got shout out in the suppliers section in Moxie’s new book! (Moxie’s the genius behind the puppets that hosted The Egg Show with Wayne and Irma) Her new book’s called I Felt Awesome: Tips and Tricks for 35+ Needle-Poked Projects

And it’s everything you’d expect from a felt superstar like Moxie! Awesome, indeed! 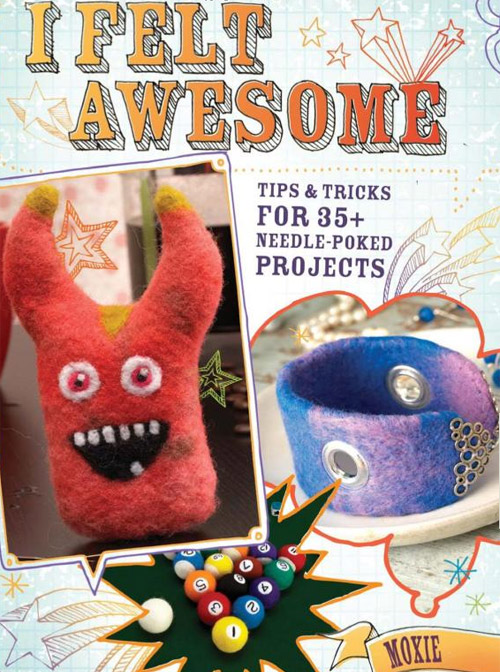 There is an amazing preview on Amazon so you can see how truly rutting great it is, or run over to the Made by Moxie gallery and gasp with delight.

Last week, while struggling with procrastination, I started my new 2011 Überlist–not really in earnest, just the whimsical brainstorming stages. I’m sure I’ll have to cull a lot of items because I have so much unfinished business from this year that I want to roll over, and I’m really going to try to quit taking on new craft and hobby interests for a year. CRAFT FREEZE! Lots of freezes in the coming year.

One that I’m really looking forward to is my CLOTHES BUYING FREEZE! I can’t buy any new clothes in 2011, and there’s no thrift store loophole. The only way I get new clothes is to make them myself of fabric or yarn that I already have, or to mend them from the Giant Mocking Pile of Busted Clothes under my sewing table. The new year hasn’t yet started and in the spirit of the coming freeze, already I’ve resisted buying socks, made a nightgown (also a 2010 Überlist item, check!) and re-patched a pair of jeans that had revolted and started wearing through outside of the existing patch zone. I think that would be a good adventure to document with updates and how-tos.

I’ve also knit EIGHT FEET of building scarf in the last week, catching me up through September! In addition to my serial list items, I’m trying to bang out an extra item every couple days in hopes of finally reaching Brenda status (at least 69 items complete). Fingers crossed!

What else is exciting and new? Ron and I are finally collaborating on some weird little dolls again. It has taken every grain of self-control I have not to ignore all my ongoing obligations and focus on nothing but dolls all week.

I think the homebrew is progressing more or less on schedule. Or if it’s not, I’m done fretting about it and wringing my hands. No more obsessive babysitting. I’ll check in once a week until it’s ready. I’m hoping the first batch will be ready for bottling and the second batch will be done with primary fermentation on Saturday. I’d like to bottle Beer #1 and transfer Beer #2 to the secondary so I can start a batch of cider. That would give my cider the better part of a week to go nuts before Christmas. On the other hand, maybe I’ll just leave them both until after Christmas, and recapture the 3 or 4 hours I’d be preoccupied with brewing. Yes, that sounds like an excellent idea. I will pull out the hydrometer and check them both, though, just for shits and giggles.

This weekend will be devoted to making Christmas presents, yay! All our money is getting poured straight into the furnace/property tax/doctor bills*, so this will be a fairly modest handmade Christmas, but honestly, that’s really nice. While I know half of my handmade glory never gets eaten/drunk/used (you kind of have to be a maker to actually use handmade food & bev; other people put it in their pantry for a decade and peer at it suspiciously from time to time), I also know that half the time when you drop a bunch of cash on presents, the stuff just ends up in the closet with the electric crepe pan and the pogo stick and the thigh master. My mom loves or pretends to love anything I make, my dad’s never impressed with anything either way, so that’s fine. And my grandparents are all dead and Ron appreciates handmade things (I wish I could get him some musical gear, but that’s not something I can make, and I got him a pretty good birthday present), and I don’t exchange gifts with many friends, and none of them keep score. And I don’t live in the suburbs or work in an office, which means I don’t have to keep a snarky Christmas balance sheet (people who don’t make and don’t know you sometimes dismiss anything handmade as cheap). And also, my handmade shit is AWESOME. So there. Suck it, Scrooge!

*No serious problems, just run-of-the-mill beyond-the-stingy-annual-lab-allowance-max bills. I do think doctors should be required to know what they actually charge their patients for all those laundry lists of just-in-case tests. Whenever you ask what anything costs, no one has any idea, and they act kind of baffled/put off that you would even deign to discuss such vulgar matters. And patients are just too scared not to have them done–especially when it’s about lady parts. But one weird pap, and my whole lab allowance for the year is down the toilet 15 minutes into my follow-up, and then it’s all totally out of pocket until I hit a grand. I wonder how much of the extra crap after my negative follow-up was really necessary, because that’s a big chunk of the reason I can’t buy any Christmas presents this year. Which, despite all my cheery blathering about the delights of homemade Christmas, really fucking sucks. It’s nice to be able to pick which presents you make and which you buy.

Of course, I could make a list as long as my arm of stupid money choices that actually were within my control, so I should really shut the fuck up already. Enough blame and swears. I’m off to tackle one more Überlist item before I crash.