Hats are what I should probably be knitting, but since it’s been such a crazy mild winter (with the exception of a smallish ice storm after Thanksgiving that kept knocking out the power for a couple days)–I’m talking December days in the 60s!–it’s been hard to get to excited about hats. And I love sweaters, so that’s where I started.

First up, garter toddler cardigan in 4 balls of Noro Silk Garden Lite (hope to publish the pattern this winter). It’s so cushy and cute, I kinda wanna make my own, but I’m not sure how the shape will suit a woman’s body. But since my own Silk Garden Lite sweater is possibly my favorite handknit pullover (the Silk Garden just wears and resists pilling surprisingly well, especially for a single–though I guess it’s technically kind of a phony single…), it’s very tempting. 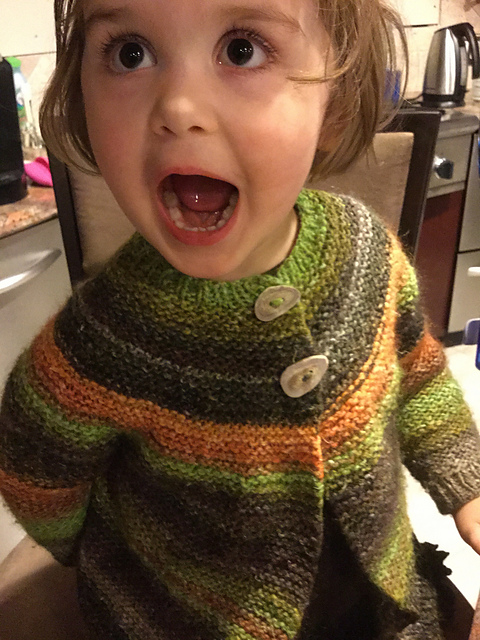 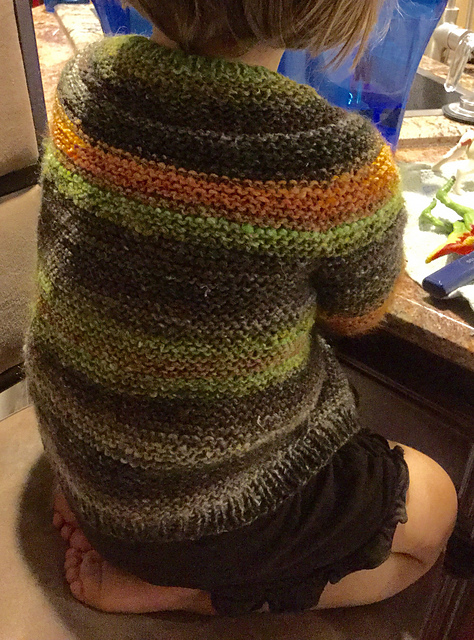 As usual, I had to break up the color progressions because the orange was too long and too aggressive to use full strength as it appeared, so I just busted it near both ends and rejoined it to omit the retina-blasting section of all but little bit on the yoke. The buttons are natural antler from Melissa’s Mohair.

And now! I’m making myself a funnel neck sweater from some long-abandoned Schulana Morbido, which apparently only 6 users on all of Ravelry have actually made into anything (and two of them were me, and both of those were frogged or chucked out). It looks like of like a horrid blob of crusty lava on the needles and I was getting nervous about my improvised pattern, so I put it on some scrap yarn at the last Spinsters Club last Sunday (Christmas swap! I got mine stolen three times, but still ended up with something that suits me) and tried it on and huzzah! Down to the shoulders, anyway, it looked pretty much just as I had hoped. Stable, tallish funnel neck and nicely fitted raglan shoulders. 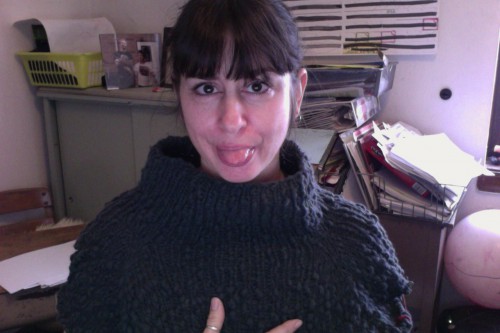 But since my neck and shoulders are pretty much the only parts of my body I don’t kind of hate right now, we’ll see if I’m as well pleased when I’ve knit my way down to the trouble zones (so, pretty much everything including and below my armpits). I’m about to divide for sleeves, which should spread the funnel out to my shoulders a bit.

The trick will be to find a compromise between the bulk of the yarn and the camouflaging requirements of my lumpy torso and thick arms. I need it to stretched down my shoulders with some negative ease for the funnel to have the look I want, but I don’t want a bunch of lumpy bumpy yarn clingy to my own lumps and bumps, so I need a bit more ease below the pits. Maybe a quick tuck under the bust and then an A-line? But I don’t know how that will shake out.

Besides knitting, I’m busy as usual with my little datebook factory. This year is The Year of the Rascal! I love love love making these, mostly because they involve HOURS of poring over magazines from well before I was born. So many candy-colored appliances, so much bacon & cake, such shiny cars and adorable children and crazy rocket ships, and so, so many bras! 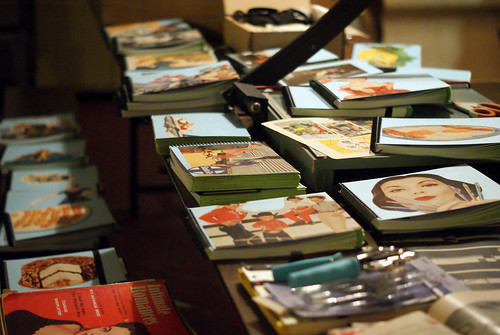 Calendar time, of course, means Überlist time. I haven’t started making my 2016 list, but early December is when I start sifting the current list, writing off anything failed or unrealistic, sorting out and color coding the slim-chance possibilities (instead of actually doing shit), patting myself on the back for the successes, and scrambling to squeeze in a few last-minute accomplishments in a vain attempt to finally, once, ever reach Brenda status (there’s a 90210-based ranking system, and I’m forever stuck in stupid Kelly territory). I’ve got about 3 more days of self-delusion before I scrap 2015 and start dreaming about all the amazing stuff I’ll never get around to next year.