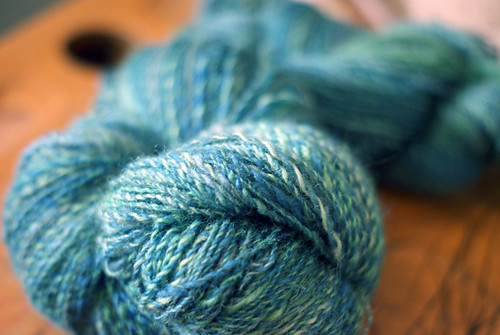 Before leaving for vacation, I managed to ply the last exhausted singles (2 x 4oz of Laura’s Pygoras Shetland) from my failed 2012 Tour de Fleece. My modest goal this year was simply to finish what I started back in 2012. What will it be? Who knows. The important thing is that it’s out of my spinning basket.

Vacation was fun, but not exactly relaxing. Two full days of international travel (including a grueling 26 hours, 4 flights, and 3 customs on the return leg, plus an extra 2 hours, thanks to a lost bag with our car keys in it) with a 22-month-old was, ahem, perhaps somewhat ill-advised. Twyla picked up a cold on the flight in that got all of us sick and lost us a couple of days of touristy fun. And grandpa’s house–which is undergoing renovations and will be fucking amazing when it’s finished–is currently a bit terrifying for the parents of a very mobile and fearless toddler, what with the plugged-in, ferociously bladed power tools scattered everywhere and the unfenced swimming pool and old skool approach to babyproofing (which is to say, not babyproofing). My dad’s constant indoor smoking was ready fuel for bickering.

(And then there’s the way I always, despite my best intentions, turn into a peevish, bratty 16-year-old asshole in the presence of my parents. I know this behavior is a common affliction, but it doesn’t make me hate myself less for it or prevent me from falling prey. When you’re actually a grownup, you have the self-awareness to be disgusted with yourself, even if you’re powerless to cut it out. When you’re acting like a peevish, bratty 16-year-old asshole, a genuine teenage cluelessness would be far more pleasant than guilty 40-something angst.)

The highlight of the trip for me was a party out in the quincho, the expansive outdoor barbecue that is the gem of the property. Their quincho is vast, more like a hotel patio than a home barbecue, with a long tiled bar, bamboo ceiling, a wood-fired grill, a huge gas grill, a charcoal grill, a smoker, a wood-fired pizza oven, plus an American fridge/freezer and a deep fryer, from which emerged endless baskets of tortilla chips and french fries. We grilled meat in the Chilean fashion, with popping rock salt over a wood fired grill. My dad invited friends, and everyone was warm and welcoming and we all ate and drank and chatted, and Birdy got to play with other kiddies. 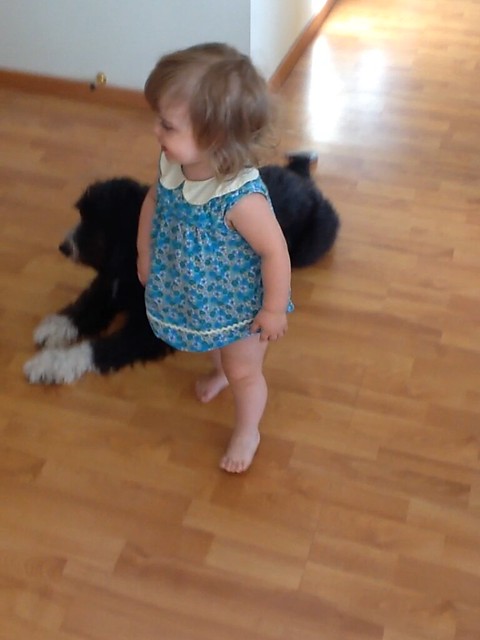 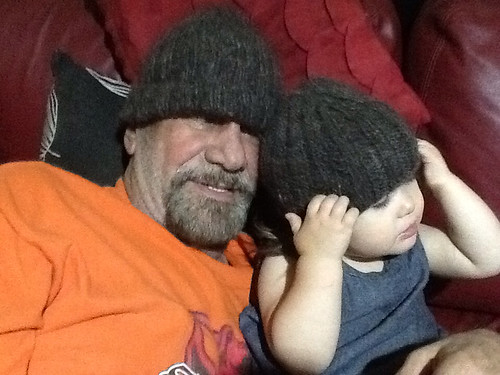 The highlight for Twyla was probably playing with my dad’s dog Gringo, he of the handspun dog fur hat, who is just as tolerant as Georgie with Twyla’s pulling and prodding. At one point, I found her astride him like a horse, hugging his neck. She was also fond of the slide. 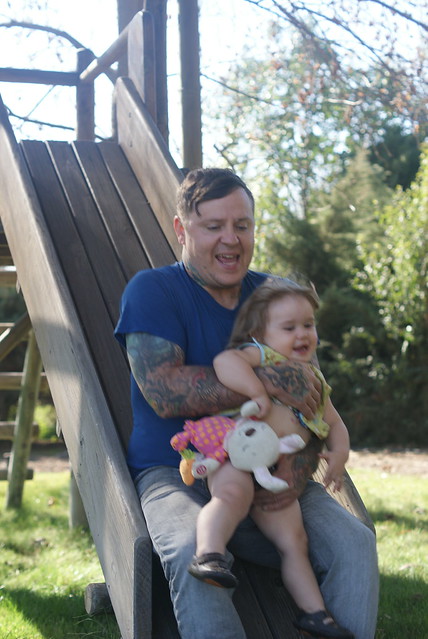 After badgering my dad into driving us, I discovered that I much prefer the panoramic views of the Andes from a great distance than from close up, with the dozens of steep, tight, harrowing switchbacks that left me green and weeping internally (and later, splashed by a 3-part waterfall of baby vomit–I wasn’t the only one getting green). 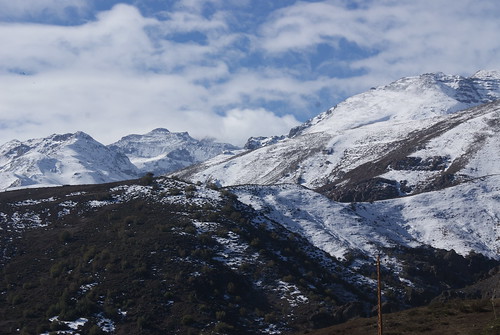 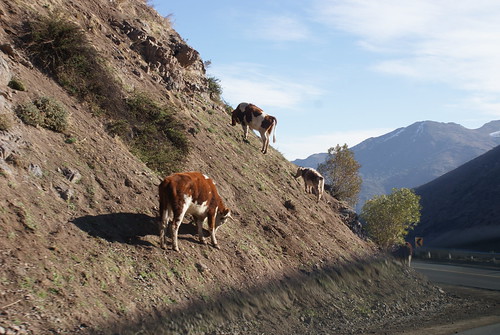 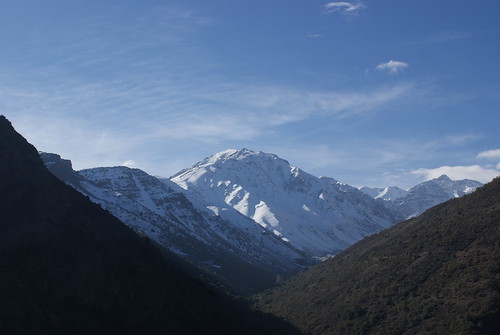 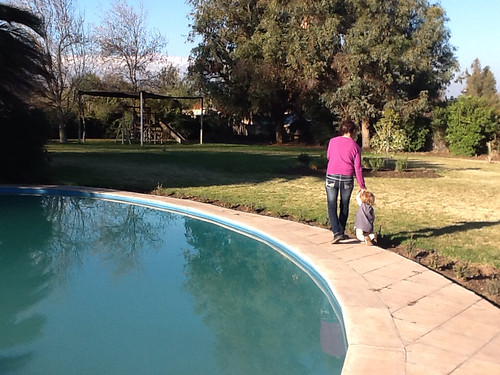 The citrus trees were laden with oranges and tangerines, and even the pepper plants leftover from summer were still producing, so we got to have my mom’s famous grilled cheese with peppers. 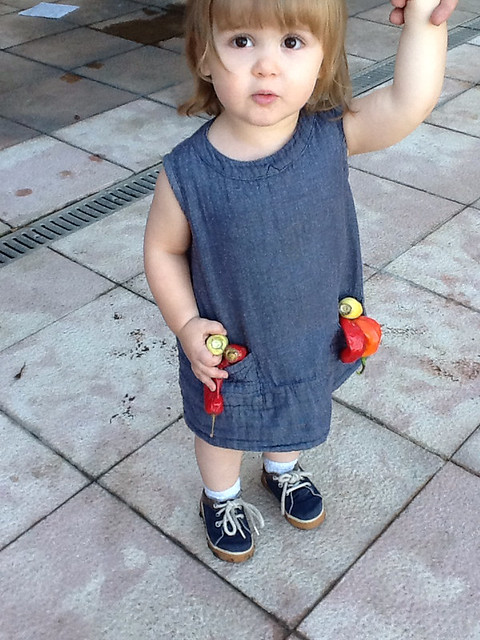 We also got enough cool days that I still got to bundle up Birdy in her current batch of hand knits one more time before she outgrows them. Of course, all the Chileans were bundled up like it was freezing. It was adorable. Next time we visit (I’ll make sure Twyla’s had swimming lessons, so I can breathe), we’ll go in December or January, so we can escape the Kansas winter and enjoy the warm South American summer by the pool, under the palm trees, sipping Piscola. Between the pool, the quincho, the playground, and the orchard, I suspect we’ll never want to leave the property. 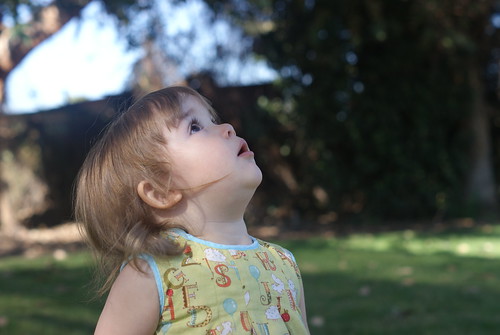 After the punishing return trip, we took the day off to catch up on sleep (it turns out that with a lap child, you definitely do not sleep on the plane, even when they do) and to do almost nothing. But on Sunday, the last day of Tour de Fleece, I dutifully pulled out one last batch of fiber, some moody green wool top I died for Woolfest a couple years ago but liked so well I decided to keep it for myself. 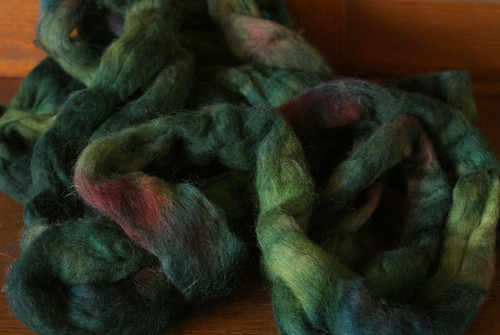 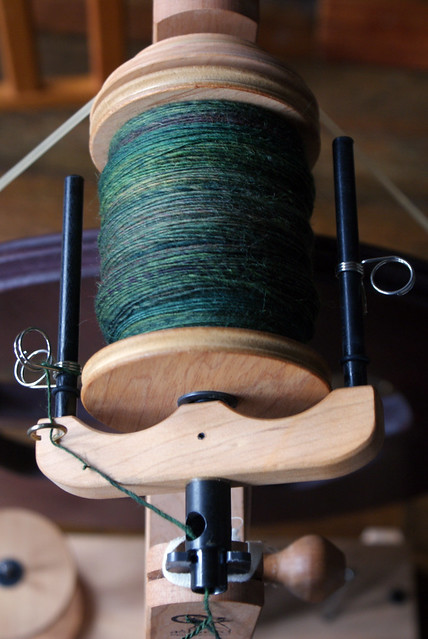 I fluffed it up across its width and then just spun it like a batt. I’m about halfway through, and though Tour de Fleece is officially over, I’m actually still working on it a bit each day. After plying all those old, lifeless singles, I’m determined to ply this one while it’s still fresh.