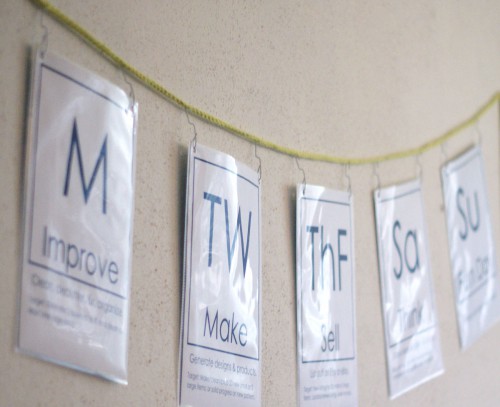 I had big plans for a massive surge of productivity in this, the last week before Ron gets home from tour. I was going to start on my shiny new work routine. I even made a spiffy banner to reinforce it (no, that wasn’t pure procrastination; okay, yes, it was). I was going to finish all my half-finished projects so I could look like a TCB badass. But the water had other plans for me.

Instead of whining about losing the whole week to the relentless flow of water into my basement and the battle against moisture, mildew and despair, I’m gonna focus on the bright side:

If you’re curious about the 40 Bags in 40 Days thing, go here. It was for Lent, so the official challenge is probably over, but I’m working on my own timetable. 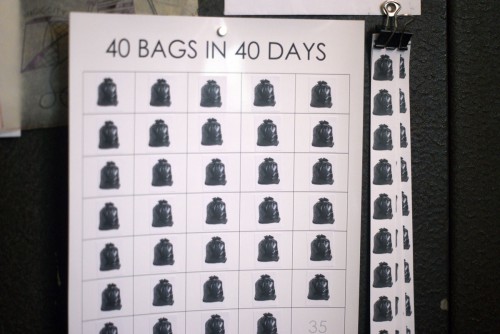 And if you want to be a big nerd like me and make yourself a sticker chart, I’ve set up a template to print stickers on those ubiquitous return address labels, using the garbage bag graphic and the idea from White House Black Shutters. If you prefer a plain chart, she has one you can download; I like ticking off the numbers.

This pdf includes a numbered sticker chart and a sheet of labels, and a link to the WHBS post about it: 40 bags stickers and charts.

One Reply to “The best laid plans”