Hooray! Now I have pictures of everyone! 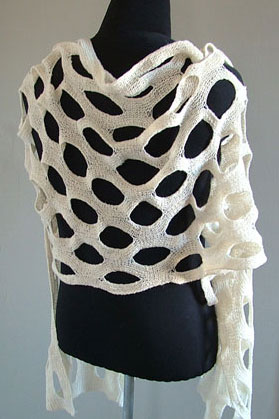 Look how pretty! It’s the GorgonianShawl KnitKit (what’s a Gorgonian? a heavy cobweb? some kind of crepe paper streamers? I’ll ask the internet…) from Morehouse Farm.

Sadly, due to my Webs bender last week, I can’t afford it. I wish they sold just the pattern. I’m sure I have something in my stash that would do nicely. Maybe it’s in the new book, that would be much easier to rationalize… That’s how I found it, from a link from the Potter Craft newsletter.

(Oh, apparently a gorgonian is a coral-like sea creature. Pretty. Okay, well named, but now I want to see it in a brighter color.)

It took me like a dozen tries of a dozen stitches before I decided that the one called for in the book (garter) was truly the right stitch. I don’t know why I thought I knew better. Anyway, I knit it all up with my pretty pink and orange-dyed tshirt yarn. And about 3/4 of the way through I realized that, while pink and orange make perfectly pretty yarn, a pink and orange rug has absolutely no place in my home. What was I thinking? It’s like all the acid green yarn I buy for scarves and sweaters, knowing how tragically putrid I look in acid green. And yet I can’t resist.

So I finished it and threw it in the washer with another round of RIT, this time dark brown. And it came out well enough. Not as dark as I’d like (think some of the sweatshirts must’ve been 65/30 poly/cotton, because they didn’t take dye well), but fairly pleasing. Except then I threw it into the dryer, where the seams broke and unraveled and made two big holes (which were actually pleasing themselves, but they’d just get worse and worse, so…). While I’m easy-peasy fixing dropped stitches while I’m knitting, fixing them from both directions with two mysterious ends was more than I could decipher.

So I unwound most of it, mended the yarn & I’m starting over. Look at that big ball! Those are my feetsies, for scale: 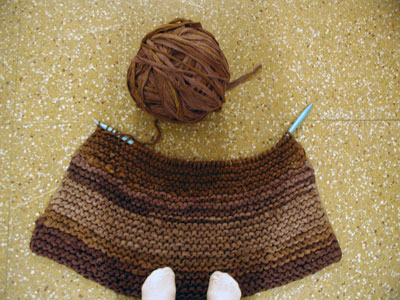 The good news is that the rug is wonderfully cushy. I heartily recommend one as a use of crappy free tshirts. I used about 6 whole tshirts and maybe 4 sweatshirts’ of fabric, but I used more than just the torso, so my yarn’s irregular. I cut the sweatshirts 1/2″ wide and the tshirts 1-1/5″ wide to compensate for the weight difference. Used 19 needles. (They’re Lion needles. Crappy cords, but they’re very long for circulars and are nice and easy to hold, and light & they knit quickly.)

Anyway, I’m officially putting away the knitting until I finish my 10 Things To Do list, which I’m making up now.

Some natural-light pictures of the alpaca fleece for the workshop…

This beautiful fiber is actually seconds (Andy’s blanket is the one being saved for competition), but it’s absolutely delicious. 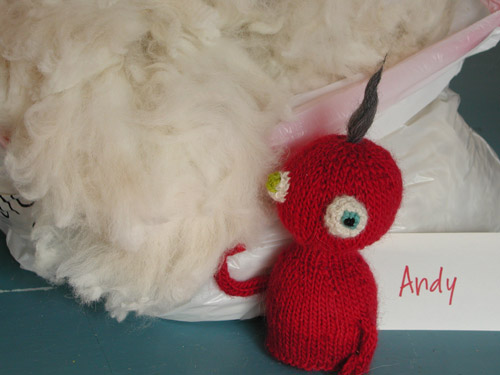 And here is Andy himself: 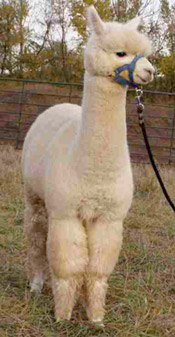 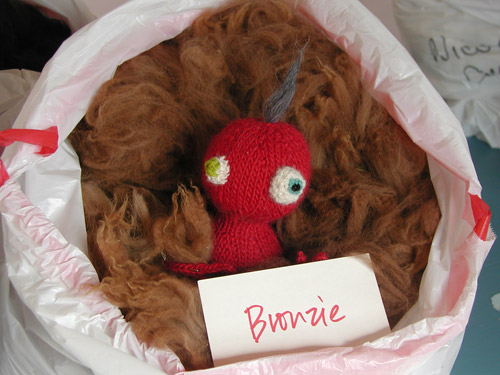 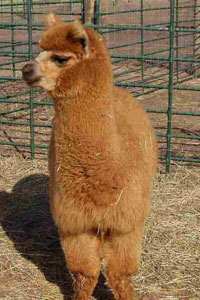 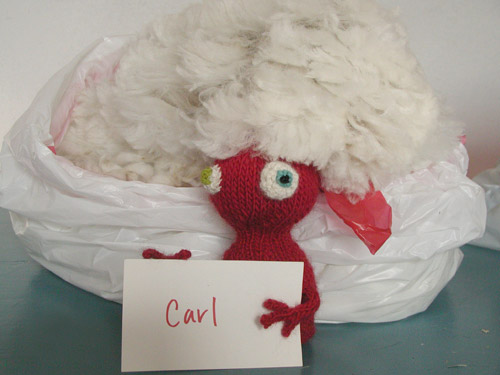 And Carl, wearing his own fleece: 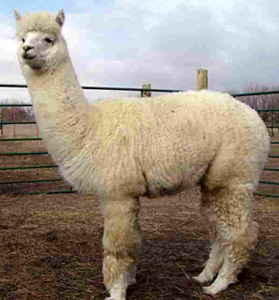 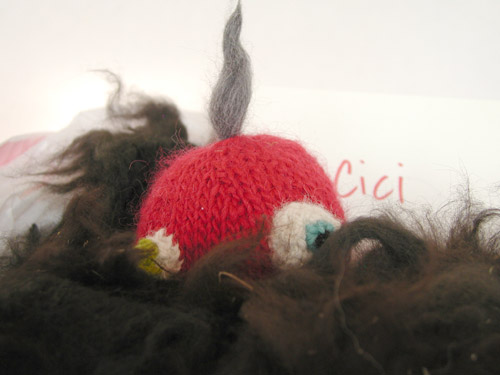 Look at little Ci-Ci! If you think she’s adorable here, you should see her bald! She looks like a muppet! 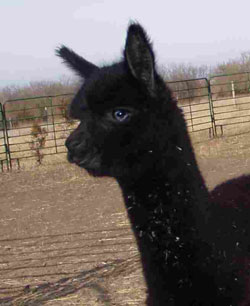 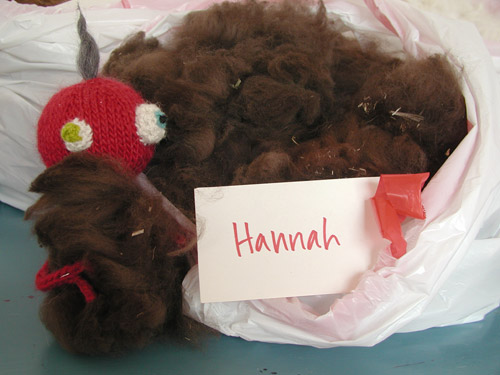 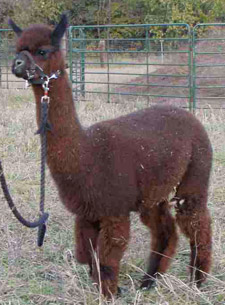 Velvetly Liana. Interestingly, the blacks were the heaviest. I think they hold way more dust for some reason. They seemed dustier. 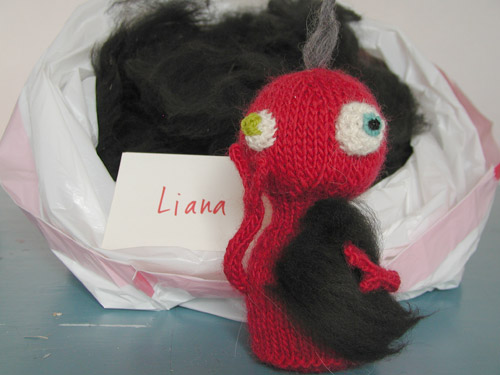 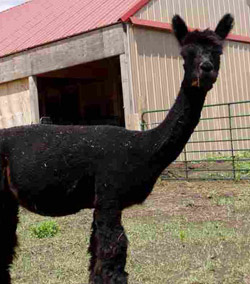 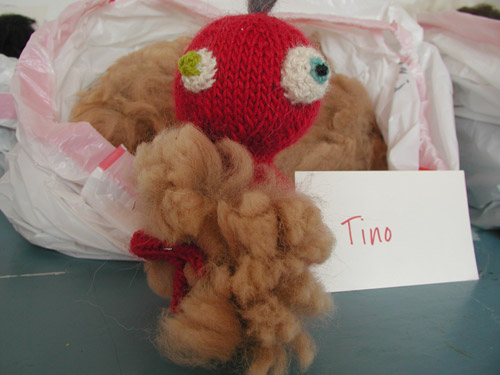 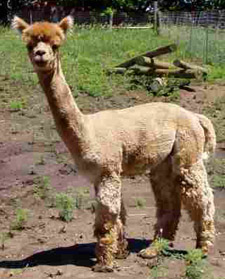 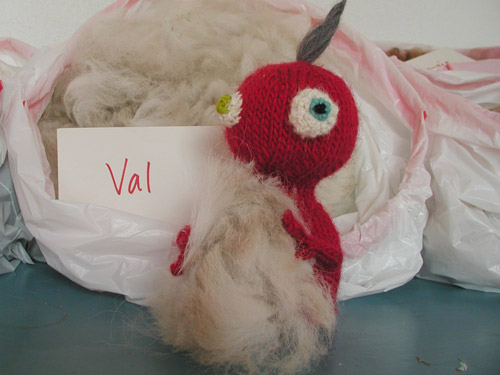 And the matron herself: 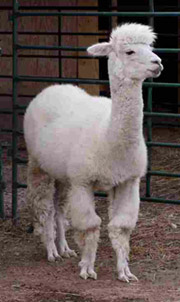 Hurrah! The gang’s all here:

Whee! Just bought a bunch of alpaca fleece for this fall’s fiber workshop. We’ll be touring a local alpaca ranch (Alpacas at Wildcat Hollow), so I wanted us to be able to spin from the animals we meet. This was my first time seeing alpacas up close and personal, and they’re so fucking cute I could cry. The looked particularly alien and puppety, since they’d just been sheered. There was even a youngster, an adorable black cria with gigantic googly lobster eyes. They all stare at you at once, bobbling their darling little heads on their crazy long necks like those ostrich marionettes. Cute! They even poop cute. They pick a toilet zone & everyone poops in just one spot, which they back up to daintily.

The color in the picture is for crap. I’ll hope for sunshine to get some nice closeups, but here’s what I bought: black from Liana and her baby Ci-Ci; a coarser white/gray from Val, the old lady of the herd; fluffy white from Carl; fawn from Tino; cinnamon from Bronzie; chocolate from Hannah; and white from Andy. Andy’s fleece was seconds, from his neck/legs, because they were saving his blanket (the fleece from the back and sides) for competition. Even his seconds were yummy-soft and nice and long. I also got seconds from Liana, Ci-Ci, Bronzie, Carl, and Hannah. If they’re too short, I’ll buy that Japanese felting book at the Yarn Barn and play with them.

I didn’t get first pick, because I missed the shearing on Saturday morningÂ (we were up very late working), but there was still lots of nice fiber. Not that I actually know anything about it. I just shot for the softest, longest, and my favorite colors.

The owners, Marta & Ed, were wonderful and so friendly. Marta promised to email me pictures, so I can show off what came from who. Besides the alpacas, they have goats (pets), a pair of Maremmano-Abruzzese (I think that’s right–just looked them up and those seem right) Italian sheepdogs, the alpacas’ guardians, and two lovely, sweet Australian shepherds, one old lady and one pup. They were very warm and kind, and they’re going to arrange for some finished yarn to be available (from their remaining fiber and other local ranches) when we tour the ranch, and we might even do a little wine & cheese thing there. The grounds are beautiful and very inviting. Oh! And they may have hooked me up with an angora lady, which would be really fun.

I noticed in the paper that 4H is selling lambs…. that might be another avenue to invoostigate as well. 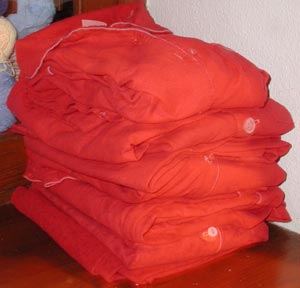 As part of my RIT kick, I took all my ratty old flannel pajams & dyed them red. So now instead of 4 dumpy faded floral pairs, I have 4 cute red ones!

I did it in a long hot cycle in the machine, with 2 cold rinsesÂ & the results were as bright as my stove-dyed ones. But I did use the bottled stuff instead of the powder. I also learned that if you start my machine with liquid (in this case, a bottle of dye and a cup of salt dissolved in a couple gallons of hot water), it will drain out all the liquid before starting the cycle. Pushed start & heard it draining. The laundry’s in the basement, which means all drains empty intoÂ thisÂ hole in the foundation & then gets pumped up & out, so I ran into the boiler room & watched in horror as all my dye ran right back out. Luckily, I had a second bottle, so I ran upstairs & dumped just the dye & a cup of salt into the washer & hoped that wouldn’t rate heavy enough to drain. It didn’t, and it turns out pre-mixing wasn’t necessary. I do wish I’d bleached out the patterns a bit more first, as you can still see them a bit on 2 of them.

I love red pajamas! They’re all old-timey. They always make me thing of a Popeye-faced hillbilly in long underwear standing on the front porch of his shack with a shot gun. I must’ve seen that in a cartoon somewhere.

each week this year. I’m going to make 3-4 6″ x 48″ strips of swatches & then seam them all up as a simple poncho. The yarn’s actually a bit less shiny than this, so the stitches fade into oblivion more in real life. Hopefully that means it will be cute & not look like a hideous crazy grandma poncho.

And if that threatens too much, I can always make it into a throw instead.

I didn’t want to block mid-strip, so it’s rolly. From the top, down:

My favorite so far is the first one (from the bottom), the Basket Rib, which reminds me of thermal underwear and which I think would make a really great simple fitted sweater. It’s pretty bulky, but it’s also quite stretchy. And I don’t like baggy sweaters, so unless it’s fitted, I ain’t making it.

I’m a little behind. Week-wise, I’m at the beginning of February. But I didn’t start until March, and I had to order more yarn (I only had 1 ball, which I had bought as a sample). It’s the Webs Berkshire, which looks a lot like Lamb’s Pride, but the hairy part is alpaca instead of mohair, so no itch! The fabric gets softy-wofty and drapier when it’s washed. I really like it. Plus it’s $4.99 for 100g (which translates to $3.99/$3.74 with the Webs discounts), very thrifty! Many yummy colors, including lots of good reds, blues & greens, but no good chocolate browns or khakis, annoyingly.

1 ball made the first 5 squares. And they’re not really all different colors, I just sloppily adjusted the levels on the various squares to compensate for the lighting. 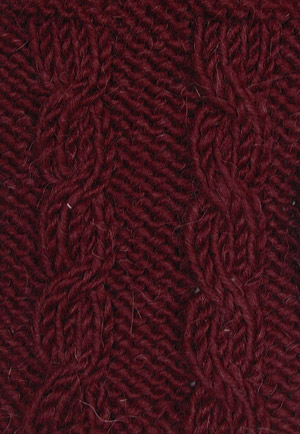 You know what’s clever? Signing on to write a bunch of knitting patterns before Prom. I’m doing some for the 2 Lion books knitgrrl is editing and 2 for Vickie Howell’s upcoming crochet book! I’mÂ feeling both thrilledÂ about the projects and sheepish for throwing more irons into my fire. I’m like Kelly Sue with the writing, only worse, becauseÂ I’mÂ actively seeking it out, while she’s just a girl who can’t say no.Â Because we don’t already have a zillion things to do. I am a dumbass and a glutton for punishment–and working on some very dandy new projects, so there. I mean,Â it’s not like I wouldn’t knit otherwise. I can’t control myself with the knitting, so I might as well make a little scratch off it, right? And they’re not actually due until after Prom. And most of them are practically written already. And it’s work, and work is good, right? And knitting reduces stress, right? Ah, very nice. Procrastination by way of knitting, neatly justified.

As long as I’m deluding myself, now I’m going to go pretend the thunderstorm that’s on its way is going to magically bypass the leaky roof and/or that the guy who came to give us an estimate on the repair didn’t look at the wrong fucking roof, and also that I called him back immediately and he came right back out and looked at the right one, and the estimate was very low and so we said, take care of it! and he fixed it and so thunderstorm, shumderstorm! La la la la la.

And as penance for making sure I have an excuse to knit & crochet, I’m going to go move those eleventy million boxes of craft supplies in the hallway into the craft room. I’m not actually going to unpack and orgainze them; I don’t have that much stamina. But I can move them. Ooh! I even have a dolly. Goody goody gumdrops!